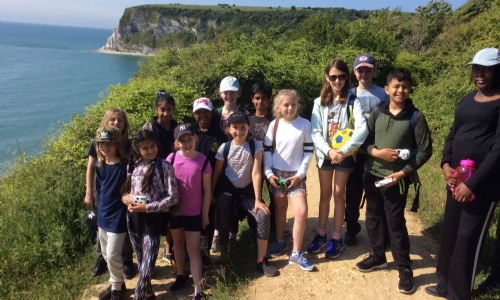 Come and see what we got up to on our walk across the Culver and our furry friend we met on the way!

As another beautiful day greets us in the Isle of Wight, the children woke us with a rush of excitement and could not wait to go outside and visit their fellow camp mates in their cabins! As you can imagine the children were in their absolute element last night and loved having no adults around to boss them about! (Sorry parents, nothing personal, they love you all really!). Miss Boyle celebrated her birthday today and as a treat the children sang a lovely chorus of HAPPY BIRTHDAY and presented her with a present and card signed by all the staff and children.

After a quick shower and change of clothes we all formed into our groups ready to head down to breakfast and start the day. In the canteen there were a variety of breakfast options available including a full english breakfast, yogurts, cereals, toast as well as some tea and coffee.

I can confirm that the breakfast was cracking and definitely filled a hole! After the children were all fed and watered, we then headed to our first activities of the day. A couple of groups went on a walk around the Culver. This took the groups out of Kingswood and around the coast where they saw some fantastic views across the Solent and even got a glimpse of the Spinnaker Tower in Portsmouth!

The walk took the groups to the top of the cliff where they stopped at Culver Monument and met a lovely cojack dog called Poppy who was possibly the cutest thing ever! The children were then allowed some free time at the top and made some beautiful bouquets of wild flowers along with some lovely crowns. Some of the children used their pocket money to get an Ice Cream at a little kiosk they came across during the walk. As you can imagine the children were over the moon at this and loved cooling down with a 99 flake!

During the morning the children also took part in some Fencing and enjoyed a fast-paced duel with their mates. The children loved the dramatics involved in this!

In addition to this, groups also took part in an obstacle course in which the children had to complete a series of tasks given to them by their instructors whilst running through a maze of assorted equipment they had to negotiate to reach the end. One of tasks completed by the children was called the ‘washing machine’ – all children had to guide themselves through a rubber tyre tunnel suspended on a wooden frame whilst holding onto their team members hands. This caused much hilarity amongst the children as some of them lost grip of their partners hands, thus breaking the chain and causing the washing machine cycle to fail!

The children also took part in the leap of faith today. To complete this challenge the children were all harnessed up and took turns to climb a large wooden pole that had a small buoy suspended close by. The objective for the children was to climb to the top of this pole and leap from it to hit the buoy. It was lovely to see how supportive the children were of their peers and the cheering on that everyone received whilst attempting the leap! I for one, did not try this challenge and gracefully ducked out!

Balance beam was another activity completed by the children today in which they were all harnessed up to a large wooden structure similar to a ladder but with more gaps and larger spaces between the rungs! The aim of this activity was to get yourself up to the highest point on the top beam and walk yourself across it without falling off. The children did some lovely flossing on top of the balance beam. I can confirm that I attempted to floss myself after the children showed me how and I am absolutely atrocious at it! Like REALLY REALLY BAD!

After our morning activities we then took a break for lunch and sat down to a lovely meal of BBQ chicken wraps, jacket potatos with cheese, sausages rolls and chips which the children adored after their busy morning! I should mention that there is also a salad bar that all children can visit to supplement their meals with healthy salad leaves as well as cucumber slices and tomato. We always encourage them to visit this, so please don’t fret!

Later in the afternoon we completed our final activities for the day. This included some puzzle solving, a field based activity in which the children had to work together in teams to solve a series of puzzles on the activity field. Some of these were actually harder to complete than you think, but nevertheless the children were resilient and were determined in their plight to solve them!

The 3G swing was the pinnacle of our activities today and definitely caused the most excitement around camp! This is basically a giant swing that the children are harnessed into in groups of two. During the activity the children assisted the instructors with pulling the children into position on the swing before releasing them after a short countdown! The children loved watching the reactions on everyone’s faces as they were released from their grip and catapulted into the air!

After our bumper day of activities we are now taking the children down to the canteen for a delicious chicken and vegetable curry before going back to our cabins for a bit of free time, we will see you all bright and early tomorrow!

Photos from today can be seen by CLICKING HERE!