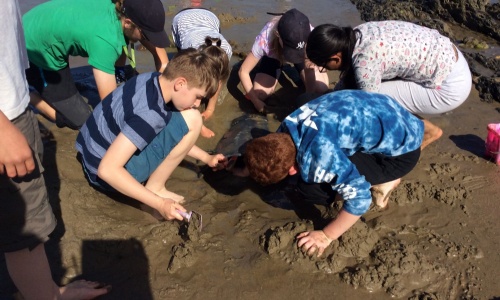 We're going to the seaside and boogying down in the disco! See all the funky details here!

We cannot believe how quick this week has gone and that we are already at our last full day in Kingswood! The children are feeling very sleepy now after a cramming a HUGE amount of activities into five short days. The teachers are also starting to flag and the caffeine is no longer hitting the spot! To relax and destress today, all groups headed down to the beach for the afternoon and had a lovely time with our group of instructors who played cricket and ball games with the children which they thoroughly enjoyed.

The sea was glistening blue and lined with ships on the horizon. As we walked down to the beach the cliffs towered over the sea like majestic chalky beasts. We all got the chance to have a cheeky paddle in the sea as Mr Pugh and Mrs Thorogood were desperate to dip their toes in and cool down! This was fabulous and the children absolutely loved seeing everyone’s reactions to the coldness of the sea as they plunged themselves in, it was bloomin’ freezing!

During their paddle the children and teachers did a spot of rock pooling and managed to find a sea urchin, a tiny sand crab, some fossilised seashells, and rocks with tiny bits of crystal in. We also came across a large jellyfish that washed up on shore and caused a huge amount of excitement amongst the children who were fascinated with it! The children also came across some cuttlefish bones which none of them had seen before. It was funny to see how the children reacted to these as most of them thought they were some kind of alien lifeform. They were stunned to discover that this used to be the bone of a fish!

To round off our afternoon on the beach the children could visit the beach café where they could purchase some Ice Cream using their pocket money. Some of the children also bought slush puppies with their money which they thoroughly enjoyed. There were a lot of blue and red tongue’s as a result including my own which the children found highly amusing! “Yes children, Mr Pugh had the blue one!”

After our busy beach trip, the children were then allowed to return to their cabins for an hour and a half to wash the sand out of their ears and get ready for the big event of the week…… THE DISCO! As the smell of Lynx and aftershave filled the air, the children made their way down to the canteen for a quick dinner of lamb meatballs and hot dogs served with corn on the cob, potato slices and greenery from the salad bar.

With their stomachs lined, the children then headed down to The Club where they merged with other school groups to have a good old boogie! Miss Boyle threw some serious shapes on the dance floor and joined the children dancing to some party tunes! Mr Pugh on the other hand failed massively to bust a move and could not even get a grip on the Macarena…waaayy too many hand movements in my opinion!

The children are now back at their cabins after having a blast at the disco and are now starting to pack their bags ready for our departure tomorrow. We are also giving the children some hot chocolate and squash before heading to bed ready for our last activities tomorrow morning. You will all have your babies back tomorrow and they cannot wait to see you all!

Photos from day four can be seen by  CLICKING HERE!