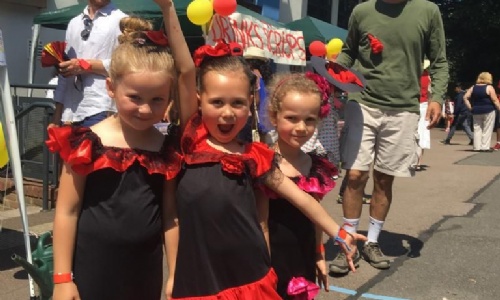 What a fabulous afternoon we had celebrating all things Spanish and watching the footie! Come and read all about the fun and games we got up to here!

On Saturday, as the sun shone and the final touches were put in place, the gates were opened and the school grounds swelled with families arriving for our Spanish themed BBQ. The huge turnout of families enjoyed an exquisite assortment of delicious Spanish food, generously provided by parents, as well as barbecue food, a selection of beverages and entertainment.

The children in Years R, 1 & 2 showcased some very skilful Spanish dancing in their beautiful costumes and this was topped off with a stunning display of Spanish dancing by a mum and her friend.

By 3pm, the hall became the most popular spot for the England v Sweden kick off! The success of the BBQ was a credit to the SPA Committee. I would like to take this opportunity to thank the SPA committee and all the parent-helpers for providing another wonderful family event which was also a great fundraiser for the school. Thank you all for coming along and supporting the event. SPA will share the final figures for the funds raised when this has been calculated.

Photos from the BBQ can be seen by CLICKING HERE! We hope you enjoy viewing them!