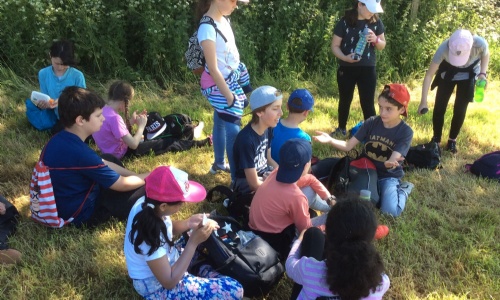 A fun filled day of Dragon Boating and disco dancing! Wiggling and a jiggling!

Mr Pugh's and Mrs Taylor's groups took a turn at hiking around Osmington Bay today, the weather was absolutely glorious and the sea was glistening from the sun. The children thoroughly enjoyed walking through a field of cows where they took great delight in watching the teachers run away from the cows in fear (THEY WERE HUGE!).

Johnny Depp also owns a house just down the road from Osmington Bay which we passed on our way back to camp. The children were very star struck and were intrigued to know if he was still living there now....sadly he wasnt due to film commitments! But he did stay there a couple of years ago to do some filming locally.

In the afternoon we all travelled to Weymouth harbour by coach for Dragon Boating. During the journey our instructors played a game of true or false based on facts about Weymouth. The children enjoyed messing with the instructors who gave them a couple of red herring questions to answer!

When we arrived the children changed into their life jackets and were given safety training by their instructors before climbing into two boats on the sea. The instructors then gave everyone a set of ores to propel their boats along the water. The two teams raced each other across the water and had a great time competing for the title of fastest rowers.

In the evening we all got our boogie on for the disco! After dinner the children returned to their chalets to get into their disco outfits. Today it was Kacper's birthday, so we had a couple of cakes organised so that both Kacper and Dom (who had his birthday earlier in the week) could blow out their candles together. After everyone had wished both boys Happy Birthday, a lovely group photo was taken - all our children looked so smart!

With the heavy smell of body spray in the air we ventured down to the hall where PGL put on a terrific disco night for the children. Mr Boyle, Mrs Hickman and Mrs Thorogood threw some serious shapes on the dance floor with the children who loved seeing their teachers busting some dodgy dance moves!

After we returned from the disco we all sat down to a lovely slice of birthday cake before the children returned to their chalets to pack their suitcases ready for our return tomorrow. No one wants to come home as we are all having so much fun!

We would like to give a shout out to Mr Hull who couldn't be here in Osmington with us this year! We miss you sir!