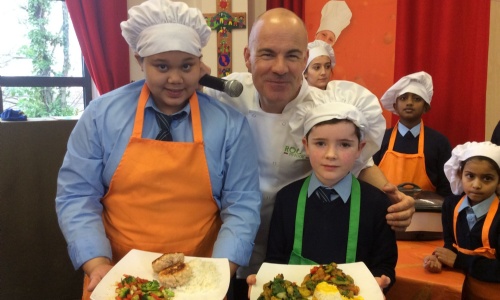 What a busy week of exercise we have had!

This week was our Healthy Living Week and we have been learning about how we can look after ourselves with a bit of regular exercise and a balanced diet full of nutritional fruits and vegetables. To start each morning, the whole school took part in a warm up exercise on the front playground. This was lead by Mrs Redmond and a group of children who did a dance routine to 'Just Got Paid' by Sigala.

The staff and children then followed the dance routine in time to the music. Everyone thoroughly enjoyed this and the children loved seeing their teachers bust out their best dance moves! Flossing is harder than it looks!

On Monday, we were visited by the Learn, Play, Grow workshop who did a presentation to the children on the celebration of sport and how all sporting champions were once children like them. The workshop taught the children that you do not have to participate in a competitive sport to engage in health and fitness activities as there are a variety of different sports available.

A celebration of sport film was also shown to the children that featured well known sports personalities from Tennis, Athletics and other popular sports. We then took part in some practical sessions in the playground where the children completed a variety of physical activities to test their coordination and general motor skills.

The Roots to Food workshop was back on Tuesday and Chef Darren returned for another 'Ready, Steady, Cook!' style event where two teacher lead teams of children had a cook off to create two healthy dishes using a steamer. Representing the orange team was Miss Mazzi, and on the green team was Miss Scannell.

Both teams had a time limit to create their culinary masterpieces before they were judged by Chef Darren and a group of very hungry taste testers! As soon as the time started, both teams leapt into action and started preparing their dishes. The atmosphere in the hall was electric with the audience cheering on both teams.

When their time was finally up, both teams presented their dishes to Chef Darren who asked each team to describe what they had made and how they thought the cooking had gone. The smell of garlic and spices filled the air which made all of our stomachs rumble in anticipation! Chef Darren picked some volunteers from the audience to test both dishes and give a verdict. Mrs Monahan also joined in and sampled the food. After a lot of debating, a winner was decided......THE ORANGE TEAM with their Cheese and Chive Salmon Cakes!

Both recipes from our Roots to Food workshop can be downloaded at the end of this article. Thank you to Chef Darren for visiting us again this year, we look forward to seeing you again soon!

The children, teachers and parents all took part in Bhangra sessions in the school hall on Wednesday and Thursday which they thoroughly enjoyed. All sessions were very energetic and worked every part of our bodies. Everyone found it hilarious, especially when the moves suddenly sped up!

And that is it for another year, thank you to everyone who got involved this week! We had a fantastic time and all feel a lot healthier!